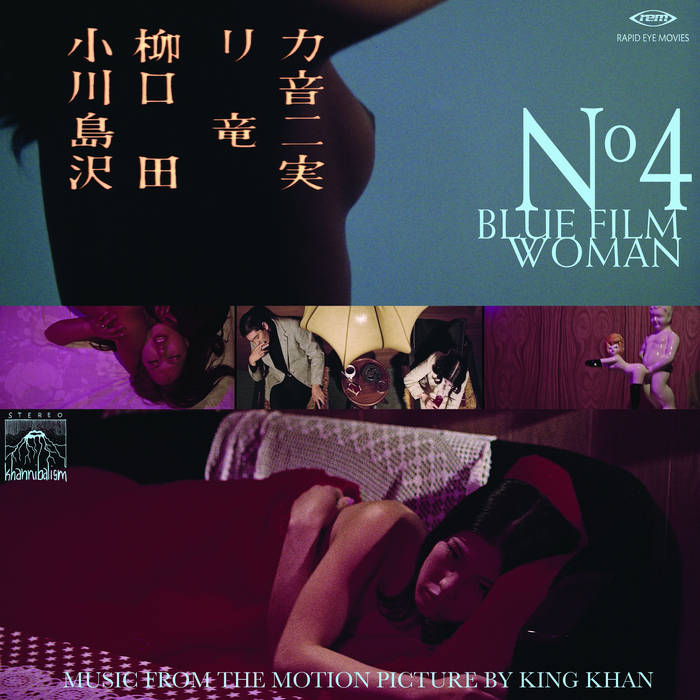 SIDE A
For Your Pleasure
Sexploration in Pink

Side B
Invocation of the Demon Dammit*
Sexploration in Blue

SEXPLORATION
by A. A. Khan

All Songs by A.A. Khan except * by A. A. Khan & Larry Mullins
Produced by A. A. Khan
Recorded & Engineered by Nene Baratto at Porc Audio & Moon Studios, Berlin

Originally released in 1969, Blue Film Woman, directed by Kan Mukai, is Japanese sexploitation at its finest. The film was recently restored and re-released by Rapid Eye Movies who asked King Khan if he could add some of his music to replace two soul songs which were used without proper licensing in the original film. King Khan freshly composed these tracks and added some of his Indian Orgasmic Bollywood strokes to it after all humpin' and bumpin' is what he does best! King Khan recruited drummer extraordinaire Larry Mullins (Bad Seeds, The Stooges) to help him beat some skin into this soundtrack. Larry also plays an incredible assortment of percussions including the Cuica (brazilian coffee can with a bamboo stick in it) which sounds very much like a monkey having an orgasm!!!!! King Khan also hired Alessandro Piretti (star of Khan's Gay Pizza Parlour series "Fire Of Love" & "Pizza Di Wow" available on You Tube) to play the legendary baby drums at Moon Studios. This maelstrom of chaos gave birth to a sweet moment in both film and music history.

Blue Film Woman is a feverish mish-
mash of horror, blackmail sexploitation
and trippy nightclub sequences revolv-
ing around the daughter of a stockbroker
who is brought to his knees by an unex-
pected financial crash. In order to stave
off bankruptcy, he offers up his wife to
his sleazy, reptilian creditor Uchiyama
who, after prodding and pawing over her,
locks her up in the shed at the bottom
of the garden where his retarded son
­Hiroshi lurks in the attic. She manages
to escape from his clutches in the nick of
time, only to be mown down by a passing
car. With her father now reduced to a gib-
bering wreck, it is left to daughter Mariko
to seek revenge. Rising from her job as
a nightclub go-go dancer to a high-class
call girl catering for prosperous business-
men, Mariko deploys all the tools of her
trade to bring down those responsible for
her family’s demise.

One of the very first full-colour pink films,
Blue Film Woman looks like it is mak-
ing up for lost time. From the very first
frame, the screen explodes into delirious
super-saturated hues, the credits appear-
ing over images from a mock blue film pro-
jected across the naked body of its starlet,
newcomer Hashimoto Miki, with the screen
flooded with prismatic blotches of primary
reds and blues, all set to a psychedelic
score dominated by bongos and sitars.