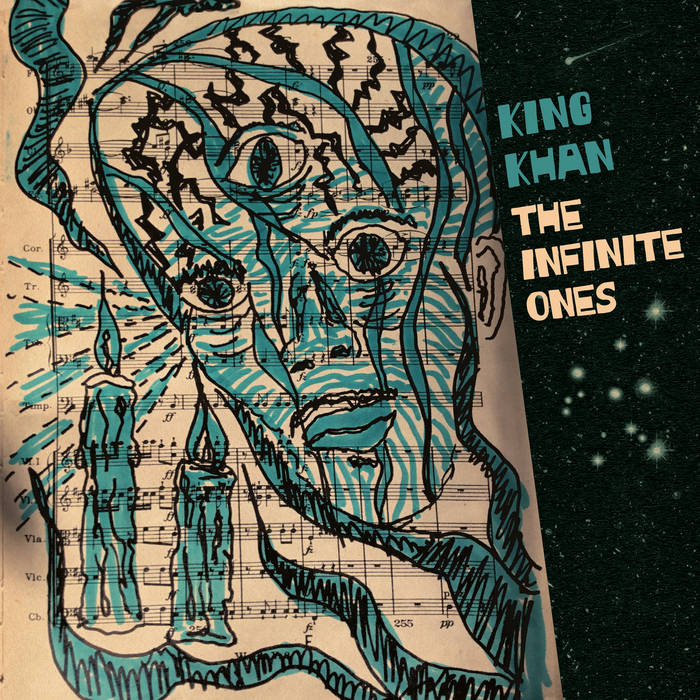 KING KHAN - THE INFINITE ONES


Sometimes a work of art comes unintentionally from a place from deep within the soul. It meanders and flops onto a table and sits and waits for its birth. The album begins with "Wait Till The Stars Burn", a planetary ode to the Sun. The second track "Tribute to the Pharoahs Den", is a requiem for Danny Ray Thompson (R.I.P.) of the Sun Ra Arkestra, his music and legacy now floating above us in the infinity of space. Both tracks and featuring Marshall Allen and Knoel Scott (of the Sun Ra Arkestra).

The song "Theme of Yahya" was a song I wrote for Yahya El Majid who played for many years with the Arkestra. I met Yahya in 2005 during my first meeting with the Arkestra. He shared many stories with me about the teachings of Sun Ra, the discipline he learned from him, and the many adventures he had all over the world travelling with the Arkestra. He told me these tales while playing a chinese harp, jamming to the sounds of Tuvaan Throat Singers, while burning a large amount of frankincense and myrrh. When I recorded the song I had four harps panned in stereo to form a sonic flower. When Yahya heard the track he telephoned me and told me that he was really moved by the piece and was proud of me. Yahya had been struggling for years with cancer and sadly passed away late August, 2020. I did not realize that my tribute to him would become a requiem, and it means the world to me that he was able to hear his tribute before he left the planet.

The album ends with a requiem for Hal Willner (R.I.P.) whose devotion to celebrating the weird and insane was like an insatiable thirst leading to deep introspection and joy in harmony and sonic dissidence.

These compositions have all come from this place inside my bipolar, seroquil ridden mind. It is as much a tribute to the great composers who have inspired me; Alice Coltrane, Rahsaan Roland Kirk, Philip Kelan Cohran, Bernard Herrmann, Ennio Morricone, Miles Davis, Sun Ra, John Carpenter, Quincy Jones, Old Bollywood, Film Noir, to name just a few. In my 23 years of being a composer of music I have had the great opportunity to score several films all of which never got any commercial fame. These films were made from the blood and sweat of film directors and their crews who tirelessly made incredible documents that were ultimately ignored by humanity. But that never stopped them nor will it stop me. These tracks are from the infinite celluloid that runs deep in my mind, body and soul. In my lifetime i never thought i would see the deaths of "Celluloid" or "analog recording". I refuse to accept the coroner reports on said fatalities, so here is my offering to the canon of cinematic overtures and analog self-preservation, for the films in our heads yet to be made.