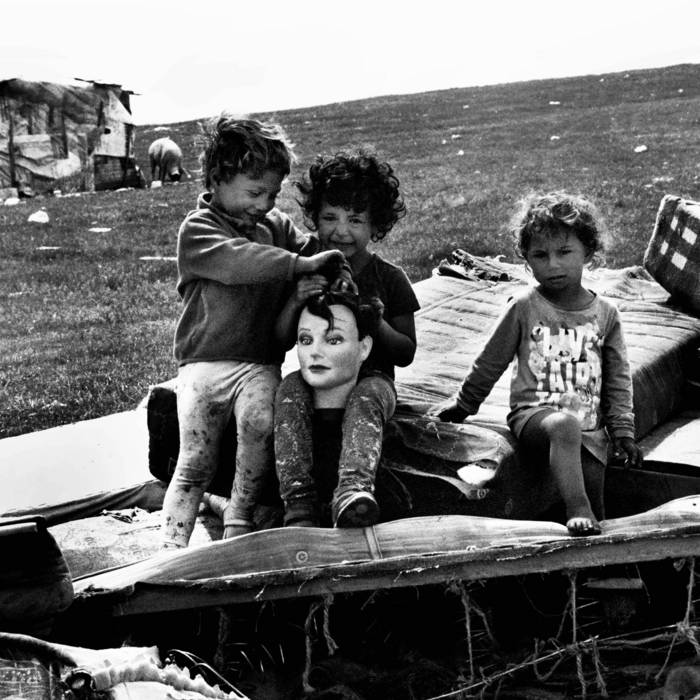 What began as a joke written in a "mass produced baseball mitts" by Young King Khan Older and Old King Cole Younger somewhere on tour in the United States of Amurikkka or was it in KKKANADA? The poem's devolution into a deep, dark, dumpster dive into the world according to legendary Berliner, Miron Zownir... This is the world as seen through the lens of the genius voyeur that watches the destruction of humanity and captures it as it happens in real time. Miron has travelled to every "shit-holio" that has existed since the 70's. His raw unbridled approach makes us ponder... How the fuck did he manage to take these pictures? Is he a master of invisibility (it certainly helps that he resembles Yul Brenner in "West World" and not that movie about the bible and pieces of wood turning into snakes). Miron yields the camera like Joe Coleman slashes with his single wolf-hair brush, slicing open the eyes and hearts of the innocent, while penetrating the minds of the wise.
Miron exposes the meat while exploding the gallbladder! Making everything taste like a sour, rotten heap of steaming bile. King Khan has been a henchman for Miron for over a decade, providing him with any musical needs he may require. Their brotherhood is founded upon justice and the revealing of a very doomed side of modern life through art, which is so rare these days. In a world infected by useless information and influencers who would be better off working at a royal bank or SPARKASSE!!! What about your Nigerian cab driver who is actually a trained physician back in Lagos, who's move to America has him counting his pennies and working night shifts for starvation wages. How about the tortured artist forced to serve at STAR FUCKS, or an even worse fate, frying concentration camp chicken for Coloniel Sanders' regime of malnutrition and mutilation... or dare I mention the true criminals... the dynamic death defying duo of economic doom and gloom... Goldmann & Sachs or the Lehman "brothers" serving-no-jail-time and living it up to this day by robbing the poor and making them homeless. While they party like it was 1991 at Mar-a-lago with Prince Andrew and the orange-bellied giant with the tiny hands dancing to Meat Loaf. Drinking diet coke, snorting fentanyl on 24 karat gold-plated aluminum foil, while unwrapping Big Macs and fish filets, freebasing Ronald Macdonald's tears...
"Highway to Chiron" is not only just a brutal drive-by shooting style vision of TOTAL brutality....
It's a melange of the lo-profit, street prophet who is high on "unknown substances" and the androgynous courtroom clerk who jots it all down working hard for the "INJUSTICE" system with their horn-rimmed Alien Ginsberg specs and puckered lips sworn to secrecy about the case at hand. Why do we so easily put all our eggs in the same basket full of holes? While Humpty Dumpties keep falling out into shards of porcelain, calcium and protein. Who is the real "bull in the china shop"? It's YOU, you silly wabbit!!!! So tread these waters carefully, cuz if the rats won't kill you, then the alligators will, and if the gators don't GIVER', then STOP AND FRISK YOURSELF!!! KKKops militarized to the teeth with plastic bullets stealing your unsmoked reefer while coming to get your "un-cool niece". Finally, in the last fleeting moments of your life, your pineal gland will squirt the final dose of DMT left in your frail, lifeless body. Only then will you witness your birth and the whole life that passed you by like it was a speeding Saturday Night Ghost Train... CHOO CHOO... CHOOSE wisely as "the buddhists keep burning" you will realize the wise words of a seventeen year-old, Cody Prairie Chicken (Black Foot/Blood Tribe) who exactly 17 years ago to this date, scribbled his fever dream/song in his diary... Let the songwriting torch/pen be passed onto the next generation of heroic dissidents..... let them decompose yet another dirty ditty about the end of our insanity, the birth of humility alongside lifeless futility and the cosmic mating ritual which was the beginning of infinity.... So take it away Old Rip Hickey Younger..... it's your turn to fight the flames..... RISE ABOVE THE POWERS THAT KILL ALL KOYOTEEEEEEEES!!!!! SHOW THEM NO MERCY!!!! NO COMPASSION!!!!! AS THEY DID TO US FOR THE LAST 2000 years...
"Lonely Bloody Black Foot Girl"
by Young Rip Hickie Older
"When the world dies and god's cry I will think of you,
this wasn't made to stop we'll start a new
I hope you are safe in your new arms
I'll mold you a place on the walls
Cause time stops the cost your soul
and the seas turn red
and the ash takes toll
and the horseman plays a song untold
and the seas, and faces and places
too clever to never be known
Your gonna realize at the end of the world
ur gonna realize you're a lonely girl
seven signs, heavens eyes chose.
through the fire, well i will find you.
and the last gaze, and the last truth.
Through the last maze
heaven's eyes appear on you
so far away
take your time and start thy phase
have no fear, for our ways
heaven lied, just start the day.
Seven signs, heaven's eyes chose.
through the fire, well i will find you.
and the last gaze, and the last truth.
through the last maze.
heavens eyes forsake our fear .
for thy ways.
take your time and start the day.
tell your god, theres a way.
seven signs. stars for daze.
With Love and Light....
your friendly neighbor "hood"
with blood from the Ganges & the St. Lawrence
King "2 Coups" Khan

Music from King Khan's "The Infinite Ones" LP on Khannibalism!!!